Let’s discover the beautiful country of Thailand in the best way, pedaling! This country offers a unique setting to enjoy cycling thanks to its good roads connected to the most picturesque villages and completely wild landscapes between Buddhas and elephants that make us dream while we enjoy our hobby in peace and harmony . The routes will take place around the city of Chiang Mai in the north , are very quiet and cozy . 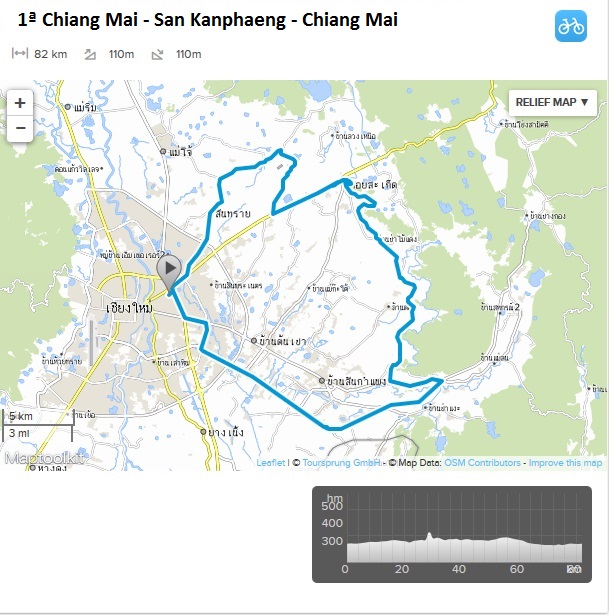 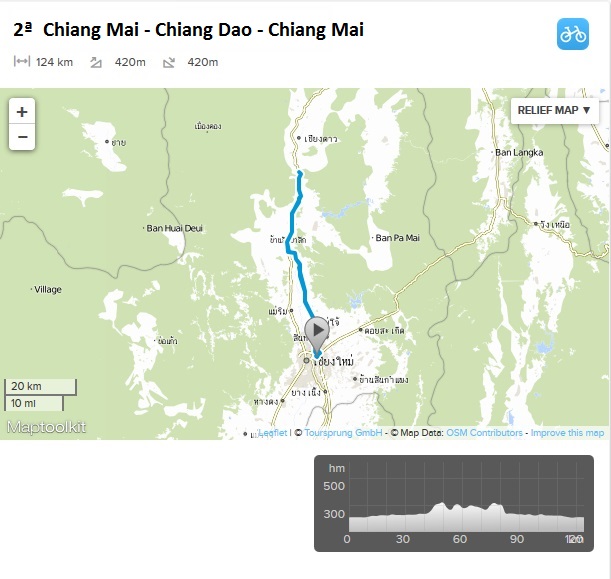 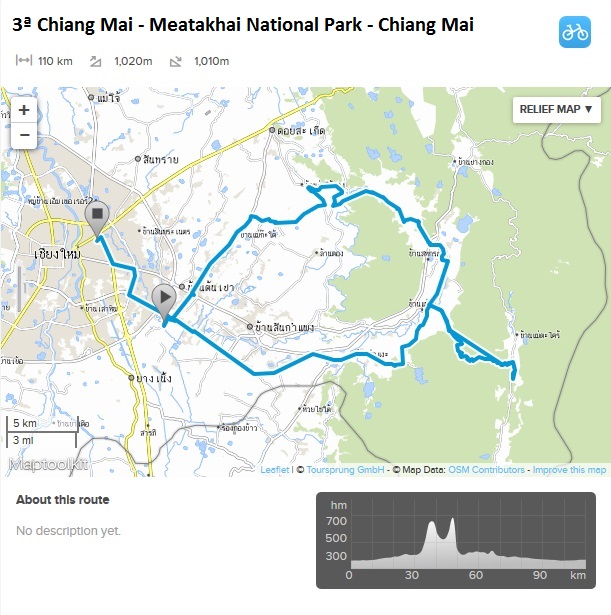 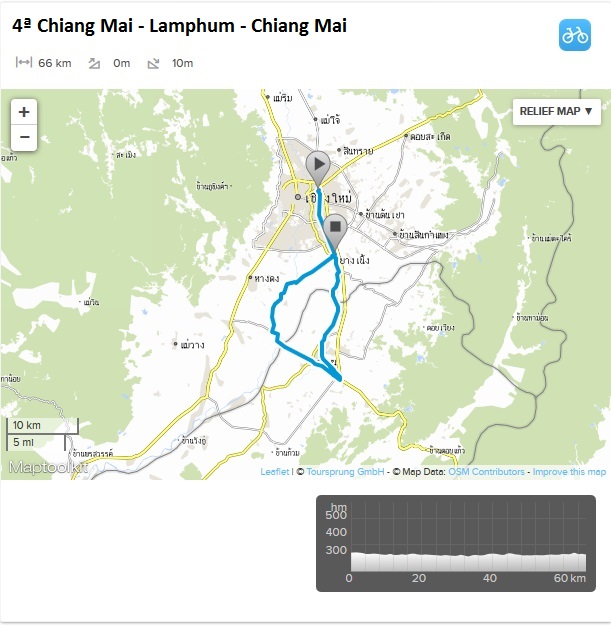 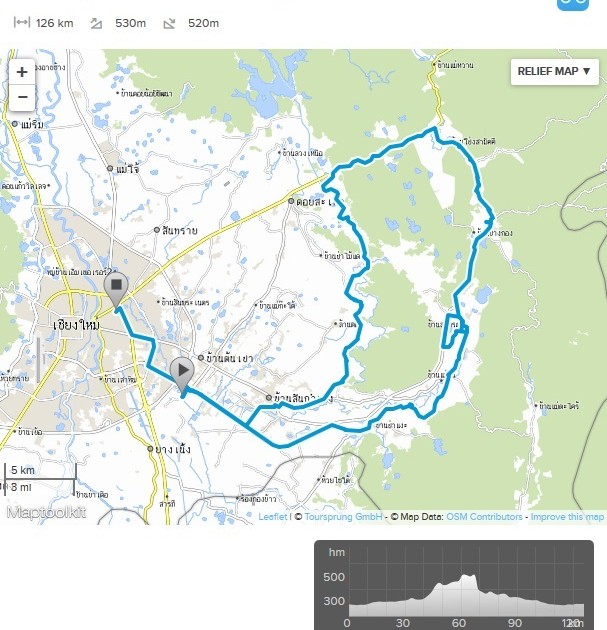 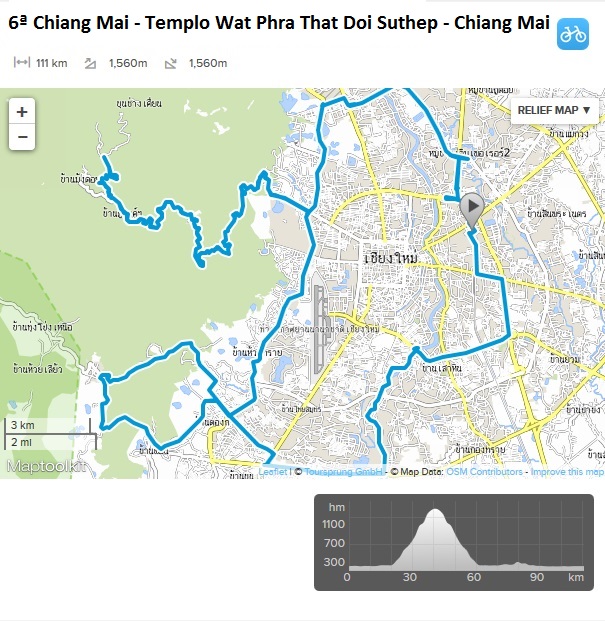 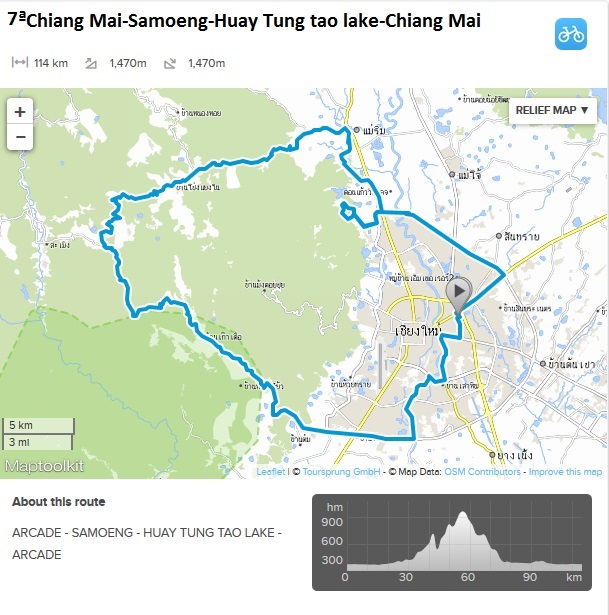 THE ITINERARY IS AS FOLLOWS:

Day 1
Be at the hotel at 20.00 for briefing and getting to know one another.

Day 2
Stage 1 82km.
Chiang Mai – Doi Saket – San Kamphaeng – Chiang Mai will be the first stage of the cyclist holiday in tailand,including a visit to Doi Saket, one of the most famous temples of the country.

Day 3
second stage 124km.
The round trip to chiang Dao that we will do will be more demanding ,but the views and were we will be eating are worth the effort. Spectacular views of the river while we are having a capuchino and a slice of chocolate cake to get our energy back before continuing .
Chiang Dao is situated at the north of Chiang Mai and it is surrounded by beautiful views of the mountains,limestones and rice fields ,Chiang Dao is an obligatory stop in the north of Tailand.

Day 4
Third stage 110km.
The third stage will take us from Arcade to the national park of Meatakhai.we will go up a port of nearly 7km and 6 % slope .

Day 5
Fourth stage 66km.
The fourth stage will be flatter and we will take advantage and loosen our legs and visit the old town of Lamphun .Under it’s old name Haripunchai ,Lamphun was the town that was furthest to the north from Mon,during the period of Dvaravati,it was also the last town to fall before Thais.The capital of the province conserves an old town where the local population live in a very traditional way. Situated by the river Kuang ,from Lamphun you can see the temples in the horizon including the netional park of Doi Khun Than,taking in account it’s wonderful flowers and wild life.

Day 6
Fifth stage 126km.
The fifth stage will take us to Mae On, an aerea situated 40km to the east of Chiang Mai we will surround the river On ,that begings at the river Ping, that rises in the national park of Mae Ta Krai and that gives the name to the district .Mae On is a popular destination for rock climbers that go here to climb the limestone cliffs “Crazy Horse Buttress”.

Day 7
Sixth stage 111km.
On the sixth stage of our stay we will ascend one of Chiang Mai’s highest mountains with spectacular views of the city.
During this route we wil visit two mounts of the national park of Doi Suthep:Doi Suthep and Doi Suthep. At the peak we will find one of the indispensable views of Doi Suthep : Wat Phra That Doi Suthep Temple , also known as Doi Suthep,which is the actual mountains name.
Day 8
Seventh stage 114km and closing dinner.
Our seventh day in paradise ,but we will not relax we will confront a new route of nearly 1.500
metres of positive slope.
Escorted by our assistance vehicle we will go from Chiang Mai to Samoeng and surround the lake Huay Tung Tae.This route known as Samoeng ,is a very popular route for cyclists and motorcyclists and it recieves it name from the city of Samoeng,that is next to furthest point of the route.
Huay Tung Tao is very well known and is visited by the residents of Chiang Mai specially at the weekends because it is perfect to spend a day with family or friends refreshing yourselves in the waters of the river and enjoying the marvellous local foods at the restaurants and pick nick areas, it is also known as the bech of Chiang Mai.
At 20:00 closing dinner with pizes and raffles in one of the most emblematic restaurants of Chiang Mai.
*The routes can change depending on the weather and the size of the group.

The activity will be between 9.00 to 14.00 , leaving the rest of the day free. There will be optional activities such as visits to temples… with special prices , reservations may be made the day before. 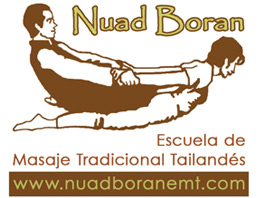 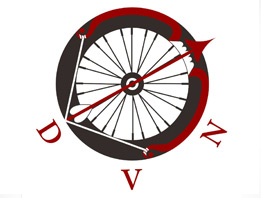 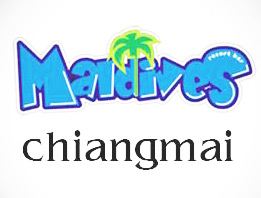 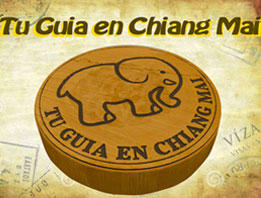 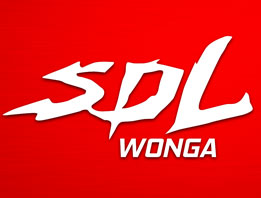 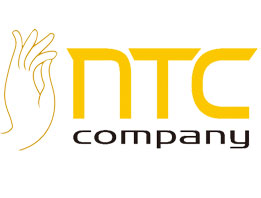 At the time of contacting us for booking, you will immediately receive an email with the steps for the payment that can be made in one or two installments (50 %), being the first one to confirm the reservation. The transaction will be provided through the bank account.